Some speakers are very thorough in the preparation of their speech, but when they go “on stage” something doesn’t work. Sometimes it’s uncontrolled anxiety, more often a sense of embarrassment or awkwardness.

1. The actor and the speaker
Speaking in public is an art that doesn’t involve only words, but rather the whole body. Dramatic techniques, exactly the ones used by the actors, can really help, in a way that is experiential much more than theoretical, to gain confidence and stage presence.

Theatrical training is a “natural” gym for public speaking, because actor and speaker have many common features: both of them have to face an audience using empathy and involve it with energy, persuasion, enthusiasm and personality.

The dramatic techniques target mind, body and emotions and, through the same exercises used in theatre schools, help the people loosening up and discovering hidden expressive potentials. Thus they help developing confidence, mastery of one’s own means and self-perception.

2. What is the aspect that communicates more?
The most surprising part of the “theatrical gym” is the one that concerns the Non Verbal Language that, according to a famous research conducted in the 70s by Albert Mehrabian, conveys as much as 90% of our conversation. The NVL is developed through three main channels: 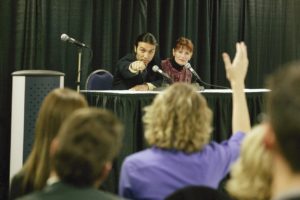 It may seem incredible but only the 10% of our communication is entrusted to the Verbal Language, meaning the “script” and the words.

3. Learning the techniques
Another ability that the actor and the speaker have to acquire and train through the dramatic exercises is to dominate their emotions and to manage stress and anxiety before a performance. This can be achieved, for example, with some relaxation techniques or simple respiration exercises. Many people are astonished in finding out that their diaphragm is a very effective anti-stress method.

With the dramatic exercises one also discovers how much the body is connected to breathing and voice, and how much the posture could influence the emission of a nervous or relaxed voice, or making it express different emotions.

Some group or movement exercises teach how to control the posture and the energy in the space; other exercises develop the capacity of observing the others to learn to “see” and understand the audience.

Improvisation exercises are very useful to develop one’s readiness and ability to manage contingencies. There are also techniques for the organization and preparation of a performance, they teach you how to “rehearse“.

4. The mask that doesn’t hide but reveals
Good actors and good speakers don’t act: they don’t pretend. Both of them have to offer their true self to the audience and to be authentic. Managing to be yourself in front of an audience is perceived as charisma and magnetism, what we usually call “presence“.

How do you train to find your authenticity and, as a consequence, develop your stage presence? A very effective instrument used in the Theatre school to concentrate on the body language is the Neutral Mask. 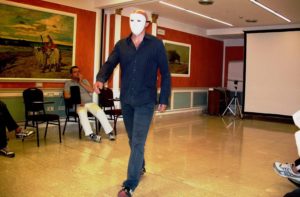 The Neutral Mask is blank and it doesn’t represent the gender nor happiness or sadness. Once worn, it deprives us of our facial expressions, the “easiest” mean of communication to express emotions and sensation and accordingly we are forced to use our whole body – head to foot – to express itself.
Contrarily to what one would think, the Neutral Mask doesn’t hide, but it reveals. It’s “magical” because by wearing it, the Non Verbal Language inevitably emerges.

During the exercises with the Neutral Mask that don’t allow the use of voice, it’s interesting to observe those who are wearing it and focusing on their movements, the walk for example, noting if the figure, as a whole, is neutral and which body parts are not neutral.

Having one’s face hidden causes hidden features of the person and the personality to show and how to use them as expressive resources: they are hidden, but not concealable! 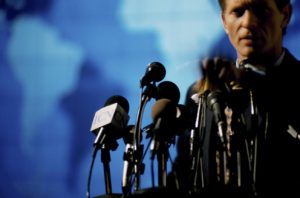 5. Working as a team to get better as individuals
To obtain the most out of theatre training it’s essential to work in a group where – in turn – one’s act as observer and observed. Video footages are very useful and common as well, as they allow to watch oneself and to analyze all of the details, even the tiny ones.

The dramatic techniques help each person to find the aspects that needs worked on and offer effective instruments to strengthen one’s stage presence and to improve one’s public speaking abilities. The results are often surprising, concerning both performances and self confidence.