The gnomes of success 1: the goals

Unlike fiasco, that arrives uninvited and doesn’t require any effort, the success of an event is never an accident. To build it one has to know where to start from and where they are trying to go.

Luckily there are the Gnomes to give us a helping hand… do you know them?

1. Which success?
This article is, in some ways, a sequel to The Four Knights of Fiasco that explains how to get rid of those ugly mugs. Here we’ll talk about their kind antagonists, the Gnomes of Success and we’ll try to understand how to make them serve our event.
It is common knowledge that, between an overwhelming success and the most withering fiasco, there’s a wide grey area, noncommittal, where almost everything went fine and something was a tad deluding.
Depending on the character of the observer this can be commented as “it went fairly well, isn’t it” or as a more expressive “bah!”. We won’t talk about the grey area but of what can create a real success, with the premise that there’s no such thing as a “magic recipe”. Anyway, if you plan using your head and thinking clearly, the possibility of doing a good job increase. 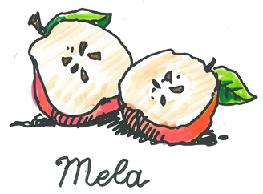 The Here Tribe and the There Tribe

Shortly, if you catch the Goals and give the Feelings some space, the success of your event is close. But to make this happen, both of them require us to work hardly for them first; after that they’ll be the ones working for us… and they usually never fail to enact this rule. You’ll have to ask yourself if you’re doing enough for each Gnome, don’t try and cheat: it’s not worthy.

3. The Goal Gnomes
Contrarily to what is commonly believed, events don’t have only one Goal, but many: in fact they are a tribe. Don’t mix them up, help them to coexist! The first Goal Gnome is called Purpose and loses no time but asks us some embarrassing questions such as “Why are you organising this event? What’s your motivation? What need do you need to meet?” If we’ll be honest in our answers and without being trivial (“To earn more money”… haha), Purpose will light up all our path. Here’s some good sample answer: “I need to motivate my sales department, which is moped lately” or “Organising a good yearly meeting is reassuring and communicates how good things are” and so on… the more precise you are the better. 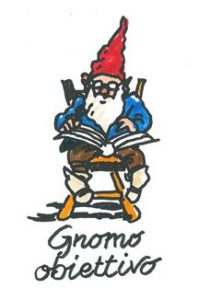 We are now ready for the second Gnome. Its name is Result. It needs to ask us some questions as well: “What would you like for it to happen, after the event?” and “Which behaviours or attitudes would you like to promote?”. Also in this case it is required to be absolutely honest and do avoid any kind of superficiality. Good examples: “I would like for every vendor to make a basic analysis of their clients” or “I want for everyone to increase their clients portfolio of the 10%” or “+10% on the turnover of the old clients”. Beware vague desires. And stupidity: “I want to trigger in them the determination of a lion!”… Roar.
Third Goal Gnome: Flash. Funny name, isn’t it? It will ask you the following questions: What do you want your participants to understand? What would you like them to remember? What should strike them (flash!)?” You could answer: “We aim to the leadership!” or “This year we need to grit our teeth” or even “we need everyone to focus more” and, why not, “an amazing end of the year bonus!” Everything’s a flash! These first three Goal Gnomes (Purpose, Result and Flash) are the most important: don’t let them out of your sight! 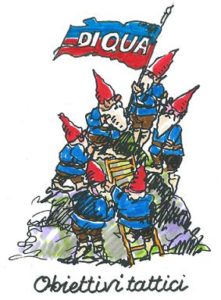 4. Other Goal Gnomes
Be careful: to obtain “Flash”, Saying is not enough: it is a chatterbox of a Gnome and it’s highly unreliable, for it never (or almost never) does what it says. Only when you’ll be clear what you’d like to turn “Flash”, and no sooner, you’ll implicate Saying and its cousin Contents.
In addition to them, among the Goal Gnomes there’s also one that is mistrustful and penny-pinching, its name is Budget. It influences everything, thus you need to treat it respectfully but without letting be bossy. If it ask you impossible things, such as organising your meeting on a shoestring, scream in protest. But at the end of the day try and listen to it, and you’ll look good in front of your bosses.
It’s now time to talk about the Tactical Goals, a gang of ever-demanding imps that you’ll have to pick first and then pander. Let me name some of them, to help you understand, but it’ll be your call to figure out who to summon: “RelaxedAtmosphere”; “WorkingEnvironment”; “IperCompetitiveness”; “FocusOnNewProducts”. This sort of people!
The Tactical Goals create the atmosphere of the event. Do not forget it!!!

5. How do you recognise a good Goal?
I almost forgot to tell you that each Goal has its own manias: they always demand to be useful, reachable and measurable. Three implacable quirks, that – if not fulfilled – make the goals phony.
Have your Goals clear and write them down, be sure they are useful, but also reachable and measurable. Be adherent to each of them: make a point of achieving a good “Goal oriented work”.
The success “Here” (remember the Here and There Tribes?!) has one key word: Usefulness! It’s the magic word of the Goals. Don’t let it out of your sight.
Once achieved this, we can go “There”. But we’ll do it in a next article… with other Gnomes.