The business is on stage

Every business is a theatrical player. It can be fun to stage it, but it is above all useful. Looking at oneself in the mirror improves the business climate. It smoothes the way for change, relieves tension, and…

We’ve all experienced looking at ourselves in the mirror and not seeing what we expected (or hoped for) but, alas, the mirror never lies! Have you ever thought about the fact that that no one can precisely describe the features of their own face? Or that no one can ever see themselves completely from behind? Except, of course, with the help of a mirror or a photograph or some other kind of picture.

Thus we can only trust in the one who observes us and in the feedback that they give, that is to say, in the image that the mirror provides us.
That is how the mirror becomes a friend, because it tells us the truth, however…the truth can be ugly. It is hard to understand, discover, know and admit reality, especially in its most critical aspects.

As the German poet and writer M. Kessel says, “every man is born a twin: the one who he is and the one who he thinks he is.”
But as harsh as reality is, it’s better to be aware of it. A mirror is even more useful in business, to encourage reflection and awareness and to reassure and build consciousness, thereby motivating change. 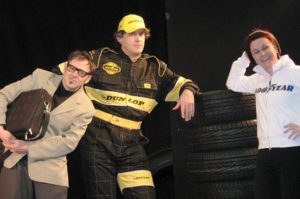 If the company wants to use an event to highlight the business climate or any critical internal issues, for example between the management and accounting areas, between the call center and the client, or even to motivate everyone with strong emotional involvement, then the answer is in theater, in other words, in an ad hoc show about the company’s life; here again the mirror in all of its strength.

When the audience identifies with the characters and sees their own stories and contradictions represented in the play, it fixes the key messages into their emotional memory. The show in which the company is able to mirror itself should be precise (personalized) but “light” enough to avoid creating rejection or resistance. For this reason, before the business is “reflected” in the mirror, it should reflect on itself in order to understand and study its reality, culture and organization (climate analysis, practices, rules, duties, regulations, intranet, forms, uniforms, lay-out of spaces, objects or artifacts in production) through single or group interviews with the professionals to whom the project is addressed.

This is also necessary in order to understand the typical language of each community (expressions, slogans, nicknames, idioms, technical vocabulary and jargon), and the salient events of the company story, the people, routines and anecdotes.

In this way the theatrical script, which should be ironic and entertaining, is born. It will be played on stage by professional actors, with the creation of sets, costumes and professional stage music. There will come a moment during the theatrical representation in which the spectators will recognize themselves in the actors and relive their own experiences. The organizational behavior will be easily deciphered and empathically understood: the famous mirror effect!

Therefore, change is introduced by bringing it to life on stage, showing critical or problematic situations and suggesting possible alternatives.
The theatrical event is never an end in itself. After the show, feedback is gathered and behavior is revised.

And how do you evaluate the ROI when you are investing in the behavior and emotions of people? It’s difficult. However, the Human Resources Director of Goodyear Dunlop, Renato Tenneriello, gives us a hand. Interviewed two years after an hour-long theatrical show was produced for his company, he said:” The results of the questionnaires we distributed speak for themselves. High efficiency and incisiveness of action allowed us to work on the internal structure for all of the following year. 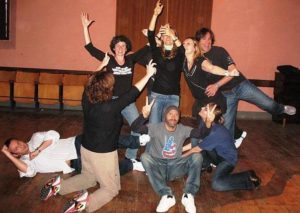 We worked out our issues with new and positive involvement, motivation and energy from everyone. We also set many expectations which cannot fail. In this way we solved our problems.”

The theatrical show on/about the life of a business reminds us of Jean Cocteau’s ironic quote “Mirrors would do well to think before sending back our image!”

So: “Theatrical mirror on the wall…what is happening in my business realm?”