Suddenly, a touch of Renaissance

The jester bursts into a serious business convention and recites his impromptu verses.

The mood warms up and everyone enjoys the brilliant entertainment, wondering: “What is he going to do next?” It’s a well-established trend to make corporate events more rich, interesting and surprising, even with the use of slightly eccentric ingredients.
Organizers often use art to bring charm, beauty and pleasure to the events, with the use of music, set design and graphics, not to mention the new techniques for virtual sets taken from theater and television, with their truly amazing special effects.

Art in all of its forms is becoming frequent at company meetings and the presence of actors or singers who are often invited to “lighten” the conference is also common.

In the evolution of business conventions to varied, multi-sensory events, an intelligent and popular, ancient and deeply Italian kind of art is emerging, which has its roots in the great medieval and Renaissance theatrical tradition.

It is poetic improvisation, with the poet telling stories of jesters and the comedy of art. Sly, shrewd and humorous, impromptu poetry is a flash of intelligence that captures your attention and provides surprising, unusual fun. Improvisation is a poetic genre still alive in many parts of Italy, where poetry contests are held and the audience follows along, mesmerized. There is also an online championship. Poetic improvisation is very much alive in Tuscany, Lazio, Emilia Romagna and Sicily, with the great tradition of the Opera dei Pupi (Marionette Theater). 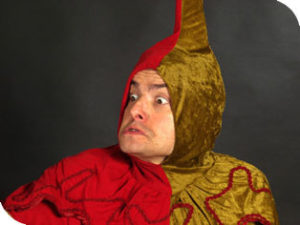 Not many artists practice it at a high level, but there are many fans that follow it enthusiastically. The famous Roberto Benigni comes from that school, as well as David Riondino and Francesco Guccini. The distraught Alessandro Bergonzoni and the cultured Umberto Eco practice it with style as an exercise of the mind.

Composition in verse, although improvised, is rigorous in technique and in the use of metrics. The so-called “ottava rima” (a rhyming system of Italian origin, consisting of eight iambic lines, with alternating rhymes) is the canonical form, the most classic and traditional. But for jokes or banter, an easier metric is used, such as “ottonario” (A line of verse with eight syllables), while for broader and more serious subjects dodecasyllables are used (dagli atrii muscosi, dai fori cadenti / dai boschi, dall’arse fucine stridenti). The transition from one metric to another highlights the change in subject, as well as the subject’s importance, and makes the show varied and captivating.

Improvisation?? Goodness, how does one use this unexpected art at serious, corporate events where everything is rigidly organized and planned?
First of all, its purpose to make the events a little more relaxed, lighter and much more fun. The jester can act simply as a presenter, or the central point of the event, and he can have a space in which he “comments” in verse on what has just happens, or predict and introduce a discussion, making it even lighter and easier to understand.

He can be a “background voice” to the president or talk with the marketing director about the subject of the convention. A group of jesters can set up a stage and talk about the next product launch. A jester may make good-natured fun of a guest or improvise a poem with the guest’s name. The director of human resources can “improvise” a duet with the jester (obviously prepared) and send his popularity skyrocketing.
The poet-jesters can be central (be the common thread) or have a more minor presence at the event (a simple show), but they will always give it a unique character of originality and lightness. They will be a surprise, and surely a success.

The use of improvisational poets can also be functional to the corporate event’s specific objectives. We know that a convention is built around a concept-force that is translated into a slogan. To hear poetry on this subject makes it memorable and familiar, and fixes it in one’s memory and fantasy as an unusual and exciting experience.

But then, if two or more teams of convention participants, each led by a jester, challenge each other in a poetry competition surrounding the theme of the convention, we’ve got a pandemonium. All the participants and the public are forced to focus on that theme and plunge the depths of imagery and sound in search of rhyming words and related concepts in a festival of fantastic ranting and magic words. The theme of the event will be unforgettable, and this is exactly what the Company wants.