A group can bond doing practically anything but there’s an activity that reproduces at best the dynamics of the team work. Its mission really is to build a team, and it’s also fun…

Interview to Carla La Rocca, that for years worked as a sailing teambuilder

1. Why sailing?
There are a number of similarities between the corporate life and sailing and that makes it one of the most suitable instruments for an effective teambuilding experience. The sailing crew as the corporate team, the skipper as the team leader, the rout as the corporate strategy, the destination as the objective, the open sea as the market with its dangers and the need of taking decisions quickly, the intensity and direction of the wind as factors of opportunity and risk… and these are only some of the metaphors that can be used to live an illuminating experience.

Most importantly the boat race perfectly represents the market competition and the team spirit among the members of the crew, the effort to reach a common goal, the renunciation to the personal interests, the importance given to safety and organization, to caution and to dare, the technical competence necessary to complete one’s task properly, the willingness to toil, the generosity in helping the weaker, the self-control while in a stressful situation… up to the pure pleasure to spend time together, the enthusiasm for victory, the capability to learn from defeat.

These concepts are common both to the sailing world and to the corporate life: as the sea can be in tempest, the market is often gusty and filled of dangers. A close team is not created instantaneously, for the simple fact of being on the same boat. Its creation needs to undergo a training process that has various steps, and requires learning and experience.

And the experience of sailing, more than any other, manages to show, in short periods of time, the most important steps, the tricks and benefits of the construction of a crew, a team. And all of that happens while having fun and being deeply involved in a wonderful adventure! 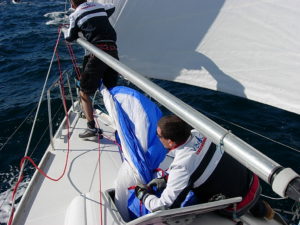 2. In a few words…
The essence of travelling by sea with a crew and working with success in a company is linked to two factors: team spirit and leadership.

The team spirit rises from the fact of sharing the same goals, the same routine, the inconveniences, the risks and the stress among the all team: no one’s excluded! On the other hand the leadership pertains only to one person but, on the boat not unlike in a company, it’s impossible to be in charge without collaboration from the others.

The leader (the skipper) needs to be the best, the most stable and the most far-seeing. But most of all he (or she) needs to demonstrate all of this and the people need to accept it. The charisma is not just a birthright, it can be cultivated through action, the “know how”.

Both the team spirit and the leadership need to be consolidated through the team work, to strengthen the relations, to learn to trust, to understand – when you are at sea – how the canny, the selfish, the fearful are unmasked in the office.

3. On the boat, like at the office
The effectiveness of some metaphors (meanings transferable in the working context) is based on the direct experience of the life on board, that is more efficacious than a hundred classes. Here’s the most important: 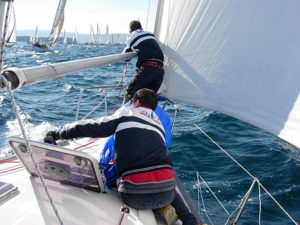 4. Good navigation
Not only is very fun and exciting, but the sailing teambuilding quickly leads to the strengthening of interpersonal relationships, to the discovery of secret qualities of each member of the team, to the valorisation of every single member of the team and to its acceptance inside the team with one common goal: the success. All of this is the most realistic mirror of the life and dynamics in the corporate world, with an added value: to find out that being together can be fun. Navigare necesse est!