Over the past 20 years, set design has accelerated rapidly in terms of sophistication and use of state-of-the-art technology. Old style conventions, where the speaker read from a podium on a bare stage, are luckily now light years away.

In fact, events – and conventions in particular – are now the most advanced frontier for innovation and experimentation in the field of virtual set design and visual communication. The possibilities offered by the new video technologies enable the creation of fantastic, articulated spaces through the use of the unusual, the surprising and the ethereal. There are practically no more limits to the artistic production.
The most common video equipment today includes plasma or LCD (liquid crystal display) screens, the latest generation of video projectors and the LED technology–great revolution of the moment- with all of its applications.

Plasma and LCD monitors have become, over time, tools of great flexibility that have an extremely vast number of applications. With their flat-frame style, these monitors have replaced old, heavy CRT monitors, creating the chance bigger and really impressive video-walls. They can be put together in large numbers with a single signal (one large image composed as a mosaic) or with a signal split between the monitors through software, creating the most unexpected effects. Today resolution goes up to HD (high definition).
The evolution of video projectors in terms of resolution and light output has been enormous in recent years, shifting from CRT technology projectors to the latest active matrix of TFT LCD monitors, moving up to those with DLP technology, which are much higher in quality. 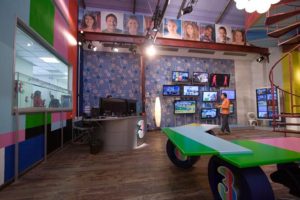 LCD technology, designed for graphic projection and presentation in general, provides fairly precise detail and is easy to use even by less experienced people.

DLP technology provides higher image quality, higher definition and a greater light output. All of these technologies can be used for architectural and scenic projections. Therefore, we can project images on monuments, buildings or squares, or, as in recent theatrical achievements, project an entire virtual set. Previous physical burdens have also been eliminated, given that projectors today can be installed almost parallel to the screen. Today’s projectors are equipped with systems that allow geometric correction, enabling projection even when completely out of axis and on uneven surfaces and are so effective that we can project images on surfaces that are corrugated, spherical or made up of the most extravagant geometric shapes, all without losing legibility.

But the most astonishing innovation in the world of visual communication – which is continuously changing – is LED technology. While video projection has the limit of being visible only with low levels of light, LED takes on sunlight. 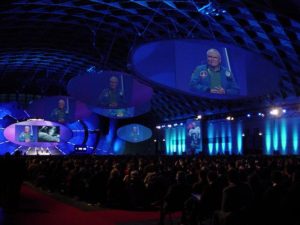 Although LED monitors have arrived at a very impressive level of definition (a minimum distance of 3 pixels per mm) it is always good to calculate the distance between vision and LED resolution. A simple rule to avoid poor images is to calculate the distance of 1 meter per millimeter of distance (pitch) between the pixels. For a monitor resolution with 10 mm (pitch 10 mm”) the viewing distance recommended is, therefore, 10 meters. The evolution of this technology has also led to the use of LEDs as a scenic element, with the invention of the so-called “creative” LEDs, which include the  bar LEDs, the transparent LEDs and the single-pixel LEDs, or rather all LEDs that can be used as a “set complements”, and that lend themselves to transparency games. There are also those which can take on more varied forms (individual pixels). It is possible to have people or props appearing and disappearing on stage thanks to the light effects created by the transparent LEDs. With single pixels it is also possible to transform an object making it appear luminescent.

This technology has been applied recently in Italy with the “LED Drops” in Laura Pausini’s 2009 World Tour. On this tour, 8 drop-shaped metal structures were covered with three-dimensional LEDs, where images were displayed.
There are many possibilities for this technology, which has already made great strides, but all of this hides a trap: that technology is used in order to fill a void of ideas, becoming an end in itself. It will amaze us, certainly, but the emptiness will be seen no matter what.