Mentalism for a successful meeting?

Playing with the paranormal… increases interest and involvement on the main topic of the meeting.

1. Why do we participate in a meeting?
You often participate in a meeting for several reasons, for example: to meet new people, to increase your own visibility in the industry or, simply, to have a great opportunity to escape from the work routine. But the planner’s challenge is to create people’s interest in the event and so to be keen to participate for what it is and what it promises.

2. Creating the interest is the task (or the obsession) of the planners
Some meeting planners decide to increase the participants’ interest by hiring an artist or a famous speaker. This strategy, that is certainly appreciated, won’t necessarily light up the interest of the participants, as said before: the performance of a singer or a speaker, indeed, will be emotional, pleasant and intense, but even if the topic of the performance is related to the meeting, it’s not sure that the people will be interested and curious about what will happen after the artist’s performance. Perhaps this is our purpose. In this case mentalism may be helpful

3. A concrete example
Let’s imagine that the meeting’s topic is the “teamwork”. And let’s imagine 2 scenarios, both coherent to the topic:
1. A speaker, full of energy and enthusiasm, goes on the stage and makes a very suggestive speech on the importance of “being a team” to achieve a common purpose. It enriches it with a real testimony of a “successful story” full of episodes in which team spirit is crucial for the challenge’s success.

2. In the dark: one spotlight is pointed on a mysterious box, closed with a padlock, in the middle of the stage. The lights turn on and the performer, after the presentations and some jokes, speaks to you and invites you to think about the possible combination of the padlock, 4 numbers. Then he asks you to go on stage and try to unlock the padlock with the combination that you thought: the lock doesn’t open. The performer asks the same thing to 3 other people randomly chosen: the lock still doesn’t open in any case.
Now the 4 of you are on the stage and the performer invites you to the ritual of the concentration of energy: gather around a circle with your hand on the top of one another’s hand, take a deep breath and shout to encourage yourselves while you put your hands on the sky. Then he invites each of you to say – in the same order you’ve been called before – just one number. The performer inserts the numbers in the order you said them and, incredibly, the padlock is unlocked! Inside the box you find a ticket for a holiday, a reward for every one of you! There was only one possibility out of ten thousand that the experiment could have been successful: individually no one could achieve the desired goal, but you did it together! And not only, you also shared the benefits! This is “being a team”! 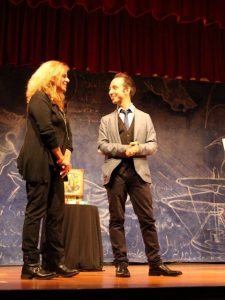 4. How does the audience reacts to the two scenarios?
In the first case the involvement is generalized, each participant absorbs the information passively (as it happens at the cinema or when you watch tv) without living a direct experience. He’s a real spectator.
In the second case, instead, the performance is interactive, the involvement is direct, and what the performer delivers to the audience isn’t a simple story, but a real experience, lived hear and now, that makes stronger the motivation and the purpose of the meeting.
Which performer can create a context that arise interest and the curiosity towards what will happen during the meeting? A performer able to build the meeting’s success not only by pure entertainment, but also by the participation of the people concerning the contents of the message?
This performer is the Mentalist.

5. What can a Mentalist do?
A Mentalist is a person who use the tool of mentalism to reproduce phenomena that in the collective imagination associated to paranormal or unexplainable experiences.
For example:

Mind reading: knowing an information that is in the mind of one or more spectators;
Thought transmission: for example transmitting an information in the mind of one or more people, influencing a choice;
Extra sensorial perception: for example seeing through walls, reading a book at a long distance, guessing in which hand is the coin…;
Identification: for example identifying the owner of a certain object and describing its past;
Prediction: knowing in advance some future events;
Control: bending spoons and keys, breaking glasses, changing the weight of common objects;
Invulnerability: walking on hot coal, lying on a bed full of nails;
Ability: extraordinary memory and fast resolution of complex calculations or the two things together. 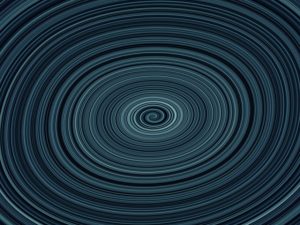 Magic? No, mentalism is a pure technique associated to personality, charisma and way of speaking. The mentalist “uses 5 senses to create the illusion of the existence of a 6th sense”. But the contribute that the Mentalist gives concerning the success of the even consists in using his abilities at the service of the leading concept of the meeting.

6. Some other examples
If the meeting’s topic is the importance to have a sharing corporate vision, the Mentalist can lead every person to think a word, which will reveal to be the same thought by all the participants: that word thought by everyone will be the key concept of the meeting.
Moreover: if the meeting’s purpose is to explain the importance of the comprehension of the body’s language to close a deal successfully, using mentalism the Mentalist will make an experiment with some people randomly chosen. He will ask them some questions and he’ll understand who is telling the truth and who is not. He will then illustrate everything he observed in their facial expressions and movement and he’ll explain how to use this information in the business negotiation. So the show becomes a real training.

7. The Mentalist’s goal
The mentalist is able, with his mentalism performance that allude to the paranormal, magical and unexplainable phenomena, to ignite the imagination and satisfy the desire to be amazed, to concentrate the interest not only on the show, but also (and in particular) on its meaning. He deals with the topic on two fronts, on the fantastic one and rational one or, if you prefer, he talks about right and left hemisphere of our brain. For this reason the “mentalism” message is so powerful and intended to last more by time. Thus he actively contributes to the success of the even, both on the appreciation side of the participants (the entertainment) and on the efficiency side searched by the Company.