Meeting in Venice: venues and locations

Venice is a unique city in the world and the whole world knows it. But not everyone is aware of “how much” is unique, until they visit it.

1. Venice is unique in the world

Venice is a unique city in the world and the whole world knows it. But not everyone is aware of “how much” is unique, until they visit it.

Of course, the canals instead of streets are unique; boats instead of cars also, the gondolas, the lagoon, the glass artisans. But it is only a part of the uniqueness of Venice, the most striking and well-known and perhaps the most obvious.

But Venice is unique because, even today, offers the ambience and the feeling of his millennial greatness: its history of aristocratic republic – proud and independent for ten centuries – it offers the splendor of its mercantile wealth and its hegemony over the Mediterranean sea.Venice is beautifully isolated on its archipelago lagoon, yet always connected with the world, at one time with his ships, nowadays thanks to the two airports Venezia Marco Polo and Treviso airport, with direct flights to / from hundreds of locations around the world. Railways and highways complete the picture of a really easy and yet unexpected accessibility.

These links make Venice not only the dream destination for the twenty million tourists a year, but also a convenient destination of great prestige and glamor to the meeting organizers 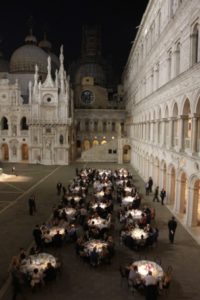 A meeting in Venice is an unforgettable event for participants fall in love with the unique lifestyle of Venice and its millenary history on the water, while benefiting from efficient headquarters and modern equipment always in accordance with their historical and artistic charm

It is possible to organize different types of meeting on the lagoon both in terms of size and character.
Two conference centers, for business – even international – conventions, and scientific associations conferences, thanks to  a large meeting  hall, parallel hall-rooms and exhibition spaces, as well as a high level of technical equipment.
The bigger one is Venice Convention, the convention center composed by the Palaces of Cinema and Casino, the Lido, with a meeting room up to 1,500 people. It is also accessible by cars and by ferry boat.
San Servolo Island is a big convention center located in an island in the basin of San Marco. A plenary hall with 240 seats and further multi-purpose spaces and accommodation are at disposal for planners.

3. Venice: the conference hotels
There are at least two hotels with congress center, which are equipped for any type of meeting and located on the two islands.
The Hilton Molino Stucky on the Giudecca Island: 380 rooms, a 1,000-seat plenary, 14 meeting hall-rooms and a business center.
The famous Hotel Excelsior is located in the fascinating Lido and it id famous thanks to the scenes of “ Once Upon a Time in America” shooted in the wonderful Stucchi hall.
The two islands are connected in few minutes with S. Marco.

4. Venice hotels
Many 5 or 4 stars hotels within a few hundred meters from San Marco, offer many opportunities to create an event set in the heart and spirit of Venice.

The hotels are equipped with meeting hall-rooms for smaller conventions, incentive travel or board meetings, but they are incomparable as the location, such as the famous Hotel Danieli with its terrace overlooking San Marco basin.
And then the hotel on the Grand Canal in historic buildings, such as Ca ‘Sagredo, Westin Europa and Regina, Palazzo Tiepolo, Bauer, Monaco and Grand Canal with the theater hall. And again, Luna Baglioni and Centurion Palace, Hotel Cipriani, Grand Hotel dei Dogi, Hotel Bonvecchiati and small local chains such as Gardena Hotels or San Marco Hotels.

5. The prestige of unusual venues in Venice
In Venice you can also enjoy several historical buildings and “unusual venues” giving highest prestige to an event.
First, there is Palazzo Ducale and the Civic Museums, the symbol of Venice, with its immense saloons.
The Museo Correr, on the Napoleonic Piazza San Marco, who recently recovered and returned to the public the rooms of Princess Sissi.
Ca ‘Rezzonico, the museum of the eighteenth century with frescoes by Tiepolo and the beautiful gardens.
And one of the temples of opera, Teatro la Fenice, with halls for over 900 people and Apollonian hall-rooms, reborn “as it was where it was” after the devastating fire of 1996.
Ca ‘Vendramin Calergi, which reflected the Grand Canal the impressive Renaissance façade, is now home to the Casino. It hosted Richard Wagner during the years of the creation of Parsifal.

The Querini Stampalia Foundation is located in a sixteenth-century palace and has a hall for over 100 people. It hosts also a Museum.

Even the Cultural Foundation Giorgio Cini on the island of San Giorgio, facing San Marco, has halls equipped for conferences.

Palazzo Giustinian, headquarters of the Biennale di Venezia, offers the hall of Columns on the first floor and the terrace overlooking the basin of San Marco.
And the ancient Scuola Grande San Giovanni Evangelista and Scuola Grande della Misericordia, offer professional assistance.
Private Museums, such as the Peggy Guggenheim Collection in Palazzo Venier dei Leoni – home to the same Peggy for over thirty year – or Palazzo Pisani Moretta in Gothic style can also accommodate events. They are just some of the beautiful places that are open to receive your guests in the places of the Venetian glories.

6. The organization of the destination Venice
The sector is coordinated by VELA SpA, a public company that manages the marketing of the City of Venice and the enhancement of prestigious assets and locations, also in profitable synergy with other entities operating in Venice and the Metropolitan Territory, such as, in particular, San Servolo Servizi SpA.
Vela spa is also the right partner for planners interested in organizing meetings during Venetian traditional events (Carnival, Redeemer, Historical Regatta …). Thus they may have a single partner able to assist them for major events at the Palazzo del Cinema, for incentive trips during traditional public events, for transport, for post activities congress (ticketing museums …) and even for a collaboration on sponsorships and the use of the brand of the city. 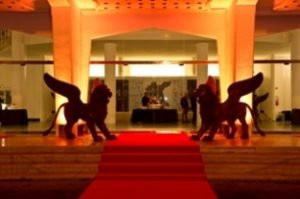 7. Great public events in Venice
During Carnival in the halls of Ca ‘Vendramin Calergi many official dinner show are held. The show are handled by the Artistic Carnival and with internationally renowned artists. During the Redentore evening you can invite your guests to the exclusive gala dinner in Palazzo Ducale, with view of the fireworks show from the loggia on the first floor. 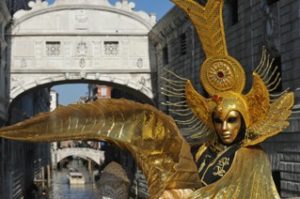 In 2012 and 2013 Venice hosts a stage of the AC World Series of America’s Cup regattas, in the basin of San Marco. The team bases will be located in the historic Arsenal of the twelfth century, originally yard and warehouse of the Venetian Republic.

8. An event with a bit of tourism in Venice
Then there is the chance to experience more “touristic” activities, as usual in Venice.

There’s a great request of Venetian rowing lessons (such as the gondolier), or – of course – for a trip to Murano and a visit to the workshops of master glassmakers. Or you can request for a technological interactive treasure hunt through the narrow streets (calli). A relaxed tour for wine bars, typical Venetian restaurants, is compulsory: cicheti (appetizers at the bar), spriz and other popular delicious food.

The Venetian cuisine is characterized by seafood, cached in the natural habitat of the lagoon and that can be purchased in the famous Rialto market. The large island of St. Erasmus, called the garden of Venice, provides excellent vegetables.

A wine news: in 2012 was the first year in which reborn Venissa wine. This wine originates from Dorona grape, a plant grown in the lagoon islands since 1400 and which had gone missing.

9. Good meeting in Venice!
This is just minimum sample of the wonders of Venice, one of the most famous city among tourist in the world. By choosing Venice as destination for your meetings you will give your guests one of the most exciting experiences of their lives, and you will have the best chance of success and approval.

Please contact me, I will be happy to help.