Live mapping to visualize the activities of a meeting

The Live mapping makes more professional every kind of event and gives a real time visualization of the activities, making the participant more attentive and producing immediate outputs.

1. Live mapping
The big or small meetings involve frequently many words and few concrete facts.
A tool to keep under control a meeting and its development is the live mapping which I built up togheter with Franco Amicucci for Confindustria Meetings.
In the live mapping, the meeting administrator built a mind map as a structure of the development of the meeting. This map can also be projected in the room with great effect on the participants who see the evolving construction of what they say or listen. Afterwards, the map can be revised and exported as a text, as a document for the participants and as a downloadable summary.
In the Confindustria case, we mapped specific workshops with a series of limited participant groups that were held at the same time. At the end, we fixed the maps up and we print on a poster, which was displayed the next morning during the plenary session. The participants did appreciate a poster exhibition, which showed in concrete terms their work and allowed the members of each group to see the map of the others.

2. Who makes the mapping
Who is in charge of the mapping? Each participant can make his own mapping of the meeting as a way to take notes. A moderator, by a secretary or someone who can use a program for mapping, can do the public or common mapping. For important meetings, a mapping expert can be used as well. If an “artistic” mapping is required you can ask to an illustrator who can design a map with its personal style. This map can be also used as a poster or a gadget to be given to the participants or to the press.

3. What do you map?
The most common mistake in mapping is to write speech-phrases with more than one concept per knots. Indeed, you have to quickly extract key words and if there are multiple concepts you can write them as key words in sub-branches. The following mapping can better explain the technique. 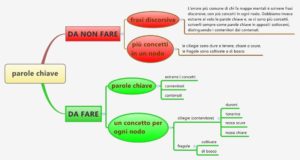 In order to organize concepts in sub-branches, you have to distinguish the container and the content. The container is always on a higher level compared to the content.
The mapping can be later enriched with icons, images, links with documents, web pages and visual relations between the knots.

4. Why drawing a map
A good mind map can be useful in order to document the development of the meeting, to take under control the attention, to give the feeling that you are producing something concrete. Finally, it can be used to get timely outputs, since the best applications can turn with a click the map into a document of text, a spreadsheet, a presentation in slide, a planning with diagram of Gantt.

5. How to make a live mapping
A live mapping must be made during the meeting activities. In order to be timely, you don’t need to be a perfectionist, but you have to immediately draw the concepts on branches and sub-branches., Inaccuracy can be later adjusted. Even visual enrichments can be done later. Those images show the live mapping service done with Amicucci Formazione for Confindustria.

In the foreground, computers through which maps and graphics are made. The live generated mapping is behind the presenter.
The four posters equip the lateral walls and the wall at the bottom of plenary room. They raise the interest of the participants.

6. Output
A mind map constitutes a good point of departure for the documentation of the meeting, both in its immediate version and in the improved and enriched version.
In conclusion, the maps are useful before the event as agenda, as a schedule of the activities, or as a structure of the subject to be developed. During the event, it becomes a live mapping. After the event, a basic documentation can be transformed into the proceedings of the meeting or into dynamic sites with audio and video shooting.