Conflicts can more effectively be solved during a corporate event

The game play reveals ways to manage conflict effectively and profitably. It explains how we are able to extricate with relationships, communication and behavior. And to experience new ways to live better in the company.

1. Common and devastating: conflict in a company
Nowadays, more than ever, conflicts arise in the company. Changes happen every day and require flexibility of roles and discretion in the working processes, and many people aren’t very good at that. On the contrary, it often happens that renovations and changes in the ownership help creating disorientation and a diffused sense of uncertainty.

Conflicts can present themselves in a number of different types: interpersonal, due to personal incompatibility, to a person-task incompatibility or to an incongruity between personal needs and organizational objectives; intra-group, created by authoritative styles of leadership, complex tasks or a badly sorted group.

All of these conflicts damage the working climate and the productivity, lower the quality of the performance, ruin individual motivation and cause situation of uneasiness and stress. 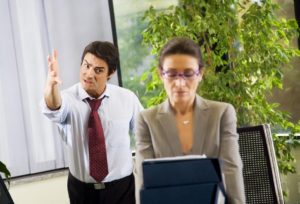 2. Finding the causes, with an eye to the future
The causes of a conflict can lie in a difference of personalities, professional interests, values or needs or in struggles for power. Another common cause is the generational clash between the younger and elder workers.

Enquiring on the causes of a conflict is the first step to take to face them, but soon after that is necessary to start pointing out possible solutions.
To avoid the vicious circle of the “rights and wrongs” and of the recriminations and revenges, it’s important for everyone to focus on the future rather than on the past and to find a way out that everybody appreciate and that provides the maximum possible satisfaction for all of the parties.

The main objective is to avoid that the conflict, be it evident or latent, spread through the company as it would create new conflicts on the base of the old, unresolved, ones. Don’t forget that conflicts rarely get better by themselves. 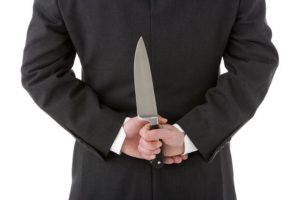 3. Corporate events: the ideal setting for problem-solving
The corporate event has a great quality: it draws people closer in a protected environment outside the office where it is easier to create a relaxed and informal atmosphere that helps to soften even the roughest personalities and to mellow the relationships. It can be, and often is, the ideal moment to improve the general mood of the company and to solve problems and conflicts in the organization.

Dining at the same table, being partners in the same teambuilding group, or even in opposite teams that “honourably fight”, playing together in front of the other colleagues or being victims of a friendly joke, being in the same workshop teams… all of these situations can instantly solve a conflict, or create the basis for a future solution.

However this “happy ending” is not granted nor automatic. On the contrary, in some cases, if the attempts to reconciliation are clumsy or if the conflict is really deep disastrous results can be achieved, worsening a conflict instead of solving it!

For this reason it’s important, when trying to use a corporate events to solve conflicts, to let a professional coordinate the “operations”. In addition to having a specific expertise on this field, he/she will be able to act as a third and impartial party.

For deeper, chronic or “structural” conflicts, it may be useful to schedule a training program more articulated and organized depending on an analysis of the needs and resources. Among the numerous techniques that can be used to start a real change and to carry the results of the training experience in the everyday working life, there’s a type of experiential training that uses theatrical techniques and methods. 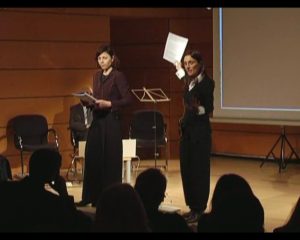 4. Negotiation techniques on stage
The saying states that: “only what passes through the emotions dwells at length in our thinking“. The theatrical fiction is, for its own nature, the place of emotions and of their representation. Everything is possible on stage. It’s easy to be faced with new realities with which we can cope in a new and often unexpected way. Theatre could be the ideal training instrument to deal with the roots of a conflict and to work with all of those relational, communicative and behavioural competences that often cause it. Conflict is not to be avoided, but managed, to create an occasion for confrontation and growth, without becoming a pathological event.

The conflict resolution through theatre is thus managed: two actors represent the conflicting parties in front of the working team. The colleagues, in turn, have to try and act as mediators. Guided by the trainer they’ll have to face the conflict in its three hardest phases: the explorative phase, during which they’ll have to listen to the positions of the two parties; the negotiation, when the needs and interests of the contenders will emerge and, at last, the phase of the agreement. This mechanism aims to reactivate the communication among the parties and an active listening, it also helps to ask the right questions to stimulate the search for alternative positions.

Through the reactions of the actors on stage, it will be clear if the mediation work is going in the right direction. If the mediator will succeed in not getting emotionally involved and in efficaciously directing the negotiation process, the contenders themselves will be the ones to propose some solutions. The trainer will also organize some debriefing moments, during which to ponder on the working realities. As a result, everyone will learn an effective method to manage conflicts.

The goal is to learn to deal with disputes not as rivals but as collaborators. Where the parties manage to implement a collaborative approach, the investigation of the past becomes merely a tool to identify future options that are satisfactory to both. Reaching an agreement between the parts will bring to the real solution of the conflict, otherwise this will reemerge and with it the emotional distress of both parties.

And what about theatre? Watching a representation of the conflict staged by actors helps to consider the dynamics that generate it and the aberrations that derive from it. This is the main function of the theatre: mirroring our life and making us think about it. And, when necessary, helping us to change it. 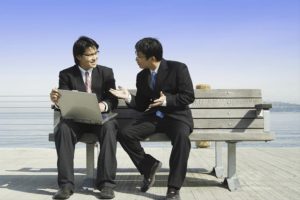 5. Advantages for the company
Learning the negotiation techniques through the theatre has the advantage of contain the time and costs of the litigations, giving a sense of responsibility to the contenders, laying the foundations for continuing the relationship after the dispute and, last but not least, it helps to find creative alternative solutions.