To get good performance, the team must have a good in-house relationship. This is the argument made in the article, which proposes a affectivity Team Building.

1. Critical situations
You could call it “gut-driven team building “, but maybe it’s taking too much confidence.
It is an educational approach that, mainly working on the pleasure of being together, aims to obtain relational well-being, team spirit, sense of belonging and shared emotions. It stimulates the instincts “gut” and ignores the “head”.
That’s the “relationship team building” to distinguish it from the “team building performance,” explained very well by Oliviero Cappuccini in his fine article on corporate regatta (see).
The team building the report is particularly useful when a working group accused of critical situations (actual or probable) in the internal dynamics, that is, in the relations between people. The most common are:
– Do not communicate: each one does his homework and defends the backyard;
– Do not trust each other: typical situation after a merger or acquisition, all men doubt the good faith of others, and you tend to see conspiracies everywhere;
– They hate it bluntly: it is usually waged war between factions, who does not take party can be forced to do so or accused of opportunism;
– Are unmotivated: nobody takes action, there is no desire to improve and pulls a living, “we have always done so,” typical of the groups of ancient formation, and no incentives;
– You know, the typical situation of a newly formed team, the dynamics that are created at the beginning affect the future.

2. Some relationship teambuilding
The first step (mandatory) is to track down the group from its context (the physical place of work) forcing the members to “play outside” and appear in a new version, no longer in the shelter of the habits and roles. If the activities will take place outdoors (Outdoor Training, very recommendable), even the clothing will help to show a side of each one different from the usual. Seeing the accountant running on a meadow in his shorts … well, it may be the beginning of a change!
The first so-called “Ice breaking” activities, will serve to break the ice and become familiar with these “new people”. Games will be easy, seemingly childish, which will have the task of creating good mood (even for their naivety) and drop people in the right climate.
Another important step is the physical contact. There are games (technically “problem solving”) which lead participants to touch, push, pull, sustain each other. 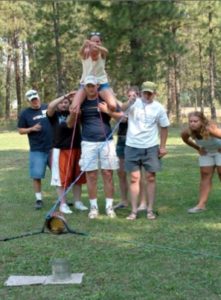 For example, the Acid River: the members of each team must cross all together a virtual “acid river” walking on a number of tiles. If one of the participants touch the ground (ends in “acid river”), the whole team will have to start all over again. Teammates must help in the crossing, generating the most unexpected and fun contacts. 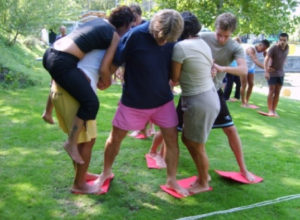 These in problem solving are done by teams, but with a good-natured competitiveness. Teams are mixed during the whole day, so there’s a continuous exchange between the participants.
A new confidence -also made of some teasing, jokes – comes from the physical contact, the infantile regression, the joy of comic situations…in short, it creates a really unusual for a working group. A little bit funny, but it’s just what we need!

3. From confidence to trust
Gradually the confidence is encouraged to become trust, e.g. with the “levitation” game, in which the group raises a colleague over the heads and transports it for a short distance taking care not to drop it from that height. The transported senses the voltage and the care of his peers for his safety, beyond the inevitable jokes. It also gives pleasure ” to abandon to another.” 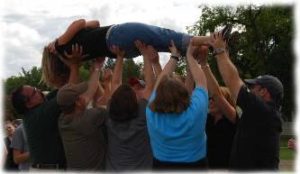 Another classic test of trust is the “trust fall”: in turns, all the participants drop back from a height into the arms of their colleagues. I may seem trivial, but if you do not trust your colleagues … Yet I have never seen anyone refuse to let yourself fall.

The secret why these techniques work and get results is (paradoxically) not to take it too seriously. The sensitivity of the trainer is to guide, use, encourage and in some case stopping some “parenthesis ” that should be useful.
However, there is a risk that activities are considered by the participants a little bit “silly“. There is always someone mumbling “with all there is to do in the office, we are here to make games.” A good trainer does not pretend not to hear, but intervenes indirectly and very soft to “recover” the Grouchy.

4. Do it together
The activities ( both outdoor and indoor) can proceed in a crescendo of complexity and commitment in order to become a real test of cohesion and efficiency of the group. For example, a large fresco by merging several individual ideas (Action Painting), the realization of a Newscast with related services (The Paper) starred in theatrical form, or even a test of orientation (Orienteering) with stops at various levels, up impressive ride on a rope bridge. Brainstorming, discussions, decisions and action.

This is where you create the shared experience that will remain in the collective memory thanks to the emotions that everyone will try. These are emotions that come from the inner side of you for having made it to finish, for having walked together in the woods, for laughing out loud of nonsense … it is the shared experience that leads to the maturity of the group. And emotions make you recognize those people no longer as simple colleagues because “we do the same job in the same place,” but as “your” group, circumscribed by the common experiences. It ‘s nice to become part of it.

5. And in the end …
The relationship teambuilding is not an afternoon of entertainment. Despite its lightness, it is a very serious training approach because it involves labor relations, touches the individual fears, the discomfort, and prejudices, and then creates new relationships, cohesion, and even a spark of happiness. It uses an enormous repertoire of techniques, and formats of activities, games, challenges and tests. It requires professionalism, sensitivity and great balance in who leads because in the perception of those who participate is always hovering between the activity sets and discomfort to expose themselves. You walk into a narrow path, careful not to become neither pedantic nor joyous. 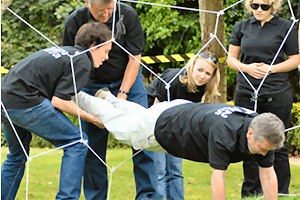 Yet this kind of team building can support the growth of the group in a very interesting self-training course, ranging from the critical situation to maturity, through some complusory step: away from the place of work, joy and infantile regression, fun, physical contact, confidence, trust, shared experience and emotions.
Invariably “gut-driven team building” leaves its mark, shortens the distance, resizes problems, makes you say “Dude did you see? Who would have thought.”
No matter the company’s designs on that group… to make it work well, you have to do it. Create an intimate bond between people, that is not a rational, but totally and solely emotional. Usually called team spirit, a gut-driven spirit! 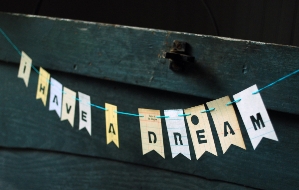